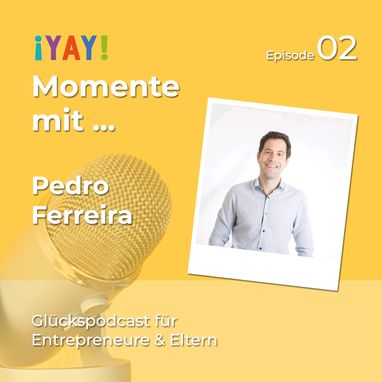 The pandemic has made people's behavior more humane.

Pedro Ferreira, the co-founder of Xperience+ and Chapter Director of the Founder Institute Frankfurt, invites us to think about the positives sides of COVID-19 and shows us how a post-corona business world could look like for "Parent-Preneurs".

Pedro Ferreira describes himself as a startup enthusiast, a community builder, and a networker. He is part of the advisory board of the Startup Guide, works as a community connector for the Singularity University, and as chapter director of the Founder Institute Frankfurt. He also is one of the co-founders of the startup Xperience plus that graduated from the Founder Institute’s entrepreneurs program last year. I'm interested in learning more about how Pedro balances, his various business activities and his private life, because as a father of four, his family life, isn't quite either. Welcome, Pedro!

Highlights from the interview

"A lot of founders around the world, especially in Frankfurt, know you as an enthusiastic community manager. You bring a lot of value to the startup scene by hosting events, creating initiatives, and bringing people together. Now, I want to put into focus that you also have a community at home: your family. Is it a big challenge for you to combine both, your private and your business life?"

"I'm not gonna lie. It's difficult and it's challenging, but it's at the same time, super rewarding. And I think it gives me even more passion and more energy. It takes a lot of energy, too. But it's what makes me wake up every day at six o'clock and feel “okay I'm doing this because of them”"

It's rewarding for me, but I also want to show them something that I'm doing and impactful. I think I've then a lot of other things in the past that I could not explain clearly or with so much passion neither to my parents nor friends. And right now, I think it's much easier. So, if I'm doing really what I love, it's easy to explain it to others. I think combining it with the family it's not an issue at all. We just need to find the balance and the structure to make it work for both of us, for the ecosystem, with my wife, and with my kids."

"A friend of mine is from Mexican, and she's often joking about the fact that her next husband will be German. She's saying that because German fathers want to show the world that they care about the kids. She finds it remarkable because Mexico's fathers don't act that way. Yeah. You’re from Portugal, Pedro, did you observe differences between German and Portuguese fathers in this regard?"

"I couldn't agree more. I feel that we have the same cultural clash with Portugal. I think it's very similar to Mexico in this example.

I already took two years of parent ship. But parental leave - for my family friends - was not the standard or the common thing to do. Most people were surprised.

Why are you doing it? Why is your wife not doing it?

Why are you the one taking care of the kids?

Culturally, it was very surprising and disruptive in a way that the father is doing it, not the mother. I had to explain myself several times for some people it's yet not well perceived because it's always, it always comes with the perception that the person that does it is the weakest. I don't know why because it is not the case.

It made sense for me to take that time. We have four kids. On one of them, I did not take parental leave and I'm very sad about it. I took on the first one and on the third one. So I, for the second one, I missed the opportunity. I dedicated most of that time only to my work and after some time I felt, okay, I wasted the best time of my second daughter's life by not giving her the attention or the priority that she deserved. That's why on the third one, I just said, okay, I'm taking the parental leave again, even if I do some work during the night. I followed my passions anyway, but I'm taking the time for the twins.

I would encourage everyone to do it. If it's not the rule or if it's not acceptable for the societies to break the rules. Because for the kids, it's something that they need. And even for us as human beings, in the end, we are not born to work. We need to spend time with our families and build the moment.

When I look back I really feel that I missed out on a lot of moments of my second children my daughter and that's why I felt from now on, I'm not gonna do it again."

"Would you call yourself a Dadpreneur?"

"It's something that I'm comfortable with. I think it's not very usual and common to do it. But I think if someone feels comfortable with the label, I would be up to use it. No issues about it."

"Women get less venture capital than men and women with kids get less than women without kids. If you were presented in a Dadpreneur’s magazine showing how much you care about your children, do you think that you would get the same amount of VC as a man who wouldn't expose himself in his role as a dad?"

"Maybe for some venture capitalists – yes. But that's what I was trying to say: As an ecosystem, we need to do the effort of trying to change the mindset and to work closely with those stakeholders. Because in a way it's not because you have more female founders that you solve the issue, you really need to work on different levels and try to be an evangelist of these issues towards different stakeholders. And one of the stakeholders is men. So, men need to be involved in these types of conversations because that's maybe the source of the problem."

"Did you bring your children to the office sometimes (during the lockdown in spring)?"

"I brought them a lot when there was no Kita, but I could see that for my coworkers there, it was kind of disruptive. I even did some meetings with babies, but it brings some additional stress that I can cope with because I'm used, but sometimes the other person or the other people are not very fascinated about it. But I think sometimes it's as well a good way to disrupt the meetings, to have an ice-breaking moment, maybe even to get them into another perspective that they see, okay, we are doing business or projects with real people

Maybe the baby is crying and needs to stop the meeting for some minutes to support the baby or whatsoever. Before this was not so visible.20:58)

But now with Corona, everyone sees it on Zoom.

I hope that once the issue is solved, there is no more Corona, and so on, that people will stick to it. So that it's normal that I will bring a baby maybe to the meeting, and maybe I need to do a zoom call from the school. People now are used to doing it, but in the future when the “new normal” is no longer normal, I hope that we can stick to some of these good parts of the bad parts."

"I think the real challenge as working parents is not time management. We’re often asked about how we do all the different tasks while carrying the children, etcetera. But I think “mood management” sometimes is much more difficult. As you said (21:55), you have to breathe in and out and then say, okay, I'm cleaning up the yogurt, and then we are going on. (here the podcast to hear Pedro’s yogurt story!)"

"And then you have to do the clique and change the mindset automatically. Yes. I think just to conclude on what you're saying as well, I think it's not only about time management. It's also about finding the right tune with your partner.

So in my case, I think, I told you this off the record, it would have been impossible to do it if I was a solo parent.

I think for my wife and me, it (the lockdown) was a great experience as a couple because we had to organize our life completely differently, trust each other's rhythm, and negotiate priorities schedules. So nothing of what I've been doing would be possible without her… So we always talk about the success of someone / of a founder, in my case.

If I was in the Dadpreneur’s magazine that you just mentioned, I think I would always try to highlight the role of my wife, because nothing of that would be possible without her, because for all the good things that I will achieve, it was because she was also there. And because we managed to somehow work together as a couple as parents. And I think society should highlight it more.

Either wives or husbands have a big impact on the success of the projects, parents obviously as well. People always speak about icons and sometimes they forget about everything that is behind the scenes. More and more people should try to go a bit deeper and understand the correlation between the success of a person and other topics like wife, husband, parents, support from other stakeholders. I think we as a society should do it more and more as well. So, thank you to my wife, because it would have been impossible to go through it without her."❤❤❤